Local Line began with an idea. I was frustrated that the food grown closest to you is the most difficult to access. I wanted to make it easy for local farms to sell food, and easy for people to buy it. So, I created Local Line to help farms move online and tap into new markets.

What began in 2016 in Waterloo, Ontario as a university side-hustle quickly turned into a full-time business. By 2017 we were selling to farms across Canada. In 2019 we expanded to serve farms in the United States. Today, we’re excited to announce that Local Line is officially going international. Local Line is now available to farms in The UK, Ireland, Australia, and New Zealand. As we continue to expand, the core mission to increase local food accessibility and support family farms remains the same.

Why is now the right time to launch internationally?

Back in 2020, our team began receiving emails from international farms wanting to use Local Line. We know there’s a lack of tools built for farming-specific workflows, and farms from every corner of the globe were asking to get their hands on our platform. Back then, we didn't know enough about those markets, so we started a waitlist with the aim of getting to know these farmers and their needs.

Today, that waitlist has grown to 272 eager farms! Each time a farm signed up for the waitlist, we’d ask them about their problems, and why they thought Local Line would be a good solution. What we learned is that the features they need are the same features we built for farms in North America. Over time, we became more confident that our platform would work just as well for them, and ultimately decided that it was important to begin improving local food systems in these countries.

Getting up and running!

Launching a platform in a new country is far from a quick and easy thing to do. Our Software team needed to add critical localization features such as currency, timezone, addresses, taxes, pricing, and more. Our Marketing team needed to establish new partnerships, and our Sales and Success team needed to prepare to support farms in significantly different time zones.

For now, Local Line will only be available in English-speaking countries. But don’t worry, we’ll support multiple languages in the future!

It’s safe to say that starting today, Local Line is no longer just a local Ontario company or a Canadian company, but an international company, whose mission is to help family farms secure their future as independent entrepreneurs.

We’re excited to help farms & producers in these new countries move online, access new customers, and run their businesses more efficiently. We won't rest until the entire globe is covered in red! 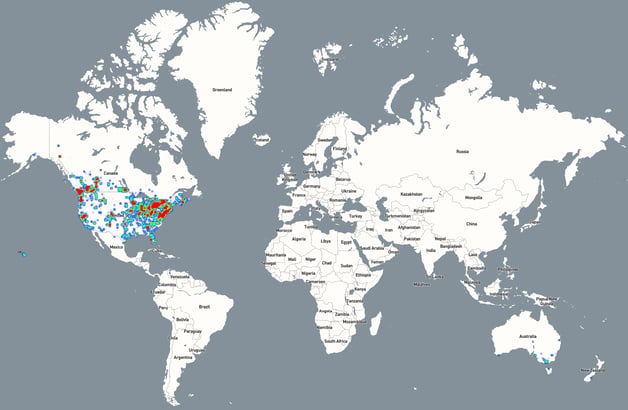 Get started with Local Line today.

If you are a farm in The UK, Ireland, Australia or New Zealand, you can sign up for Local Line now and gain access to our 2.0 platform.

If you're a current customer and know of farmers in those countries who want to use Local Line, our existing referral program applies to farms globally. When you refer a farm, you both get $100!

This new feature saves you time and energy by giving you accessible insights and data in...
Read More

Beyond buying and selling food that was grown nearby, local food is about sharing the knowledge,...
Read More